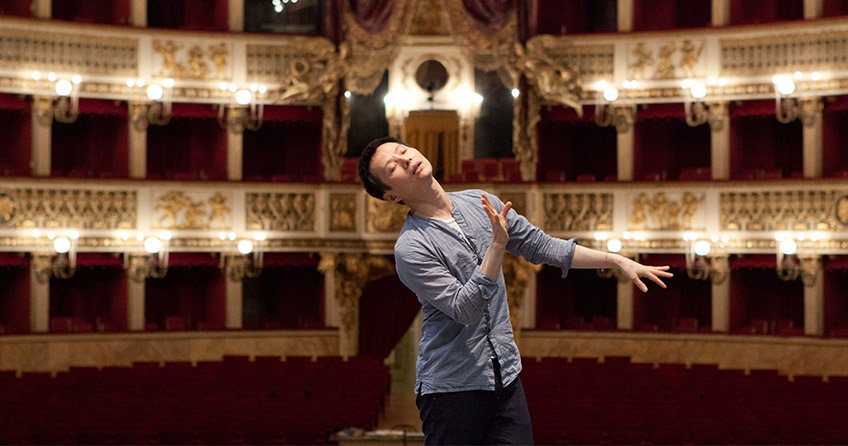 Hailed as “one of the great artists of our time” (The Washington Times), choreographer, director, dancer, painter, and designer Shen Wei is internationally renowned for the breadth and scope of his artistic vision. Admiration for his talent has earned Shen Wei numerous awards, including a MacArthur “Genius” Fellowship (2007), the U.S. Artists Fellow Award, and a John Simon Guggenheim Fellowship. Other accolades include: Australia’s Helpmann Award, the Nijinsky Emerging Choreographer Award, the Algur H. Meadows Prize, and a 2012 New York City Center Choreography Fellowship. The impact of Shen Wei Dance Arts’ premiere performances on the Chinese mainland in Beijing led to a host of awards for Shen Wei: the Audi-China 2012 Artist of the Year Award, the Artist of the Year at the GQ-China 2013 Man of the Year Awards, and, most recently, the 2013 Chinese Innovator Award from the Wall Street Journal-China.

Born in China’s Hunan province in 1968, the son of Chinese Opera professionals, he was trained from youth in the rigorous practice of Chinese opera performance, traditional Chinese ink painting and calligraphy and was a performer with the Hunan State Xian Opera Company from 1984 to 1989. During his student years, he studied Western visual art, which propelled an interest in modern dance. In 1989, he began to train in modern dance at the American Dance Festival’s (ADF) first linkage program at the Guangdong Dance Academy in China. Along with other students from the program, in 1991, he became a founding member of the Guangdong Modern Dance Company, the first modern dance company in China. Upon receipt of a fellowship, he moved to NYC in 1995 to study with the Nikolais/Louis Dance Lab and, in the same year, ADF invited Shen Wei to present his work. In July 2000, he founded Shen Wei Dance Arts (SWDA) at ADF. The Company quickly entered the international touring circuit, performing at premier festivals and venues worldwide.